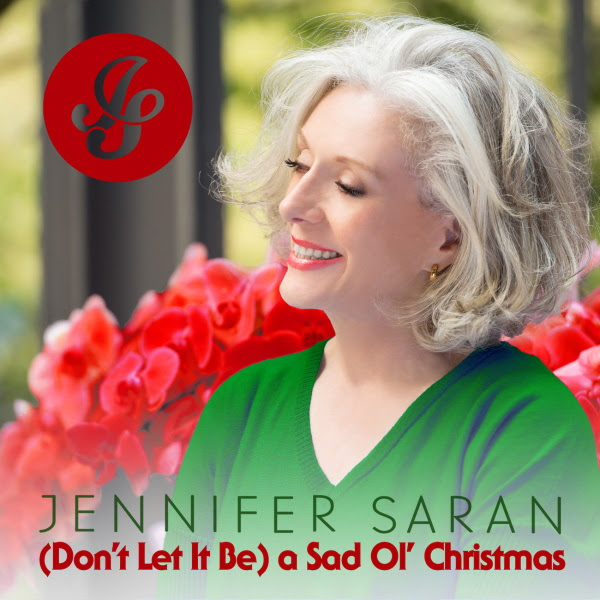 Los Angeles – Hot on the heels of her breakthrough jazz EP, Smoky Nights, internationally acclaimed singer-songwriter Jennifer Saran is revving up holiday spirits with a smashing new single, “(Don’t Let It Be) a Sad Ol’ Christmas,” to be released December 6 on Tarpan Records.

The track is yet another winning collaboration between Saran and superstar producer Narada Michael Walden (Aretha Franklin, Whitney Houston, Mariah Carey). As Saran points out, she and Walden had strikingly similar ideas concerning the title: “We had just finished Smoky Nights, which had a fair share of melancholy tunes, so when I was talking to Narada about doing a Christmas song, I said, ‘I don’t want anything sad, not this year.’

Musically, “(Don’t Let It Be) a Sad Ol’ Christmas” is a masterstroke – it’s kitschy, tongue-in-cheek jazz set in a smoke-filled nightspot, full of swanky horn pizzazz and the familiar jingle-jangle that befits any holiday standard. Walden, who recorded the track at his own Tarpan Studios, tackles the majority of the instrumentation, but he knows when to let one of his key players loose – Tammy Hall’s impeccable twinkling of the ivories is a standout moment that elicits a Saran shout-out: “On piano, Miss Tammy Hall!”

Saran’s performance is bravura stuff. Singing in a rich and radiant style that at first recalls Rosemary Clooney, she draws listeners in: “Now we all wanna celebrate/ though we can’t always get a break/ but we all have to try and make – Christmas a Thing.” At the chorus, the orchestra swells and Saran opens her voice up full-throttle with her mission statement: “No more sighin’/ no more cryin’/ get hap-py/ don’t let it be a sad ‘ol Christmas.” Backed by the ace background vocals of Cornell CC Carter, Naté Soulsanger, Katie Walden and Kristie Isaacson, Saran whips up a sassy mood throughout, peppering the final chorus with playful ad-libs like “Candy canes!” and “Presents!”

“I had a great time recording the song with Narada,” Saran enthuses. “Our method of collaboration is so effortless much of the time. He had the bones of the melody, and I went off and wrote the lyrics. When it came time to do my vocals, I just put myself in the Christmas spirit and we had fun with it. I hope that will translate to listeners.”

“(Don’t Let It Be) a Sad Ol’ Christmas” isn’t Saran’s first trip down holiday lane. In 2015 she turned critics’ heads with Merry Christmas, You Are Loved, also produced by Walden, and two years later she re-teamed with the veteran hitmaker for Souful Christmas, a delightful set of gems which saw her joined by the Temptations on the single, “Christmas Lover.”

“As I say in the new song, I really love making Christmas a ‘thing,’” Saran says. “I’ve always gone overboard during the holidays with my kids – there’s always lots of presents under the tree. And I get so much joy from singing Christmas songs. It’s important to do whatever you can to make people happy and bring them into the spirit of this time of year.”

The recent success of her Smoky Nights EP has Saran’s spirits on high. Rocktimes cited its “high elegance” and said that “one is enveloped by the atmosphere” while comparing Saran to the likes of Rosemary Clooney, Sarah Vaughan and Frank Sinatra. “I’ve been so knocked out by the reviews I’ve been receiving,” Saran says. “I’m especially pleased at how European audiences and critics have responded. They take their jazz very seriously, and they can be kind of picky, so to see them accepting what I’m doing has been a real thrill.”

In 2020, Saran is planning to expand Smoky Nights to a full album, but before then she’ll release two new songs, “Rescue My Heart” and “Almost Five O’Clock.” “I’m having the best time, and I think my new music is the best I’ve ever done,” she says. “I’m really looking forward to a year of fun and surprises.” She laughs and adds, “But before then, let’s make Christmas a ‘thing’!”

“(Don’t Let It Be) a Sad Ol’ Christmas” will be available on December 6 on all digital platforms.

To order “(Don’t Let It Be) a Sad Ol’ Christmas” on digital services please visit: https://orcd.co/saransadolchristmas 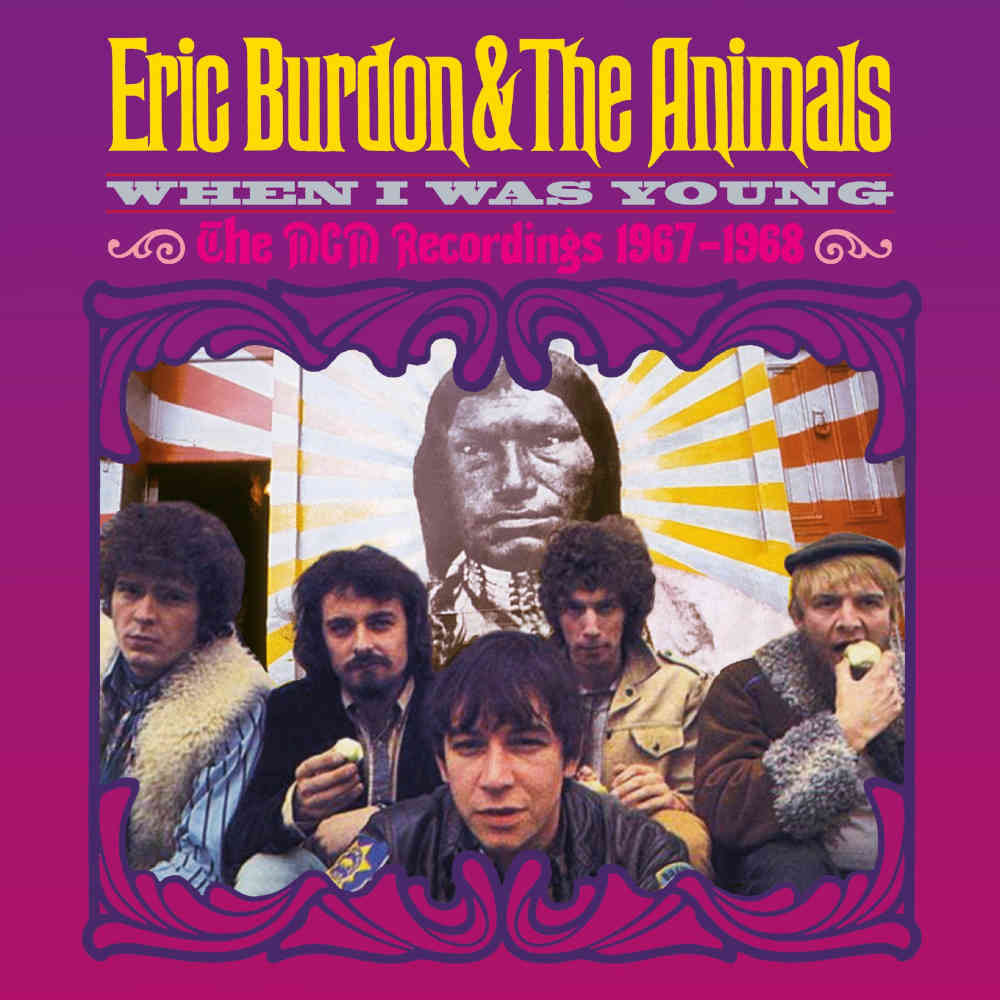 • A DELUXE BOXED SET FEATURING ALL OF THE CLASSIC ALBUMS BY ERIC BURDON & THE ANIMALS
• FEATURING THE ALBUMS “WINDS OF CHANGE”, “THE TWAIN SHALL MEET”, “EVERY ONE OF US”, “LOVE IS” & THE RARE MONO VERSION OF “WINDS OF CHANGE”
• ALL NEWLY REMASTERED FROM THE ORIGINAL MASTER TAPES
• WITH TEN BONUS TRACKS TAKEN FROM SINGLES, ALL RE-MASTERED FROM THE ORIGINAL MASTER TAPES FOR THE FIRST TIME
• INCLUDES AN ILLUSTRATED BOOKLET WITH NEW ESSAY AND A POSTER

Esoteric Recordings is pleased to announce the release of a new boxed set featuring all of the albums recorded by ERIC BURDON & THE ANIMALS for the MGM Records label issued between October 1967 and December 1968. ERIC BURDON & THE ANIMALS came together in December 1966 when the original Animals had ground to a halt. Vocalist Eric Burdon recruited Vic Briggs (guitar, piano), John Weider (guitar, violin, bass), Danny McCulloch (bass) and Barry Jenkins (drums) to form a new group which changed direction away from raucous Rhythm and Blues and embraced Psychedelic rock and the influences of the emerging counter-culture. Signing to MGM Records in the USA (where he became based) and teaming up with producer TOM WILSON (also famed for his work with BOB DYLAN, THE MOTHERS OF INVENTION & THE VELVET UNDERGROUND), the band’s debut single “WHEN I WAS YOUNG” was released in April 1967 and was a powerful statement, featuring Weider’s violin and Briggs’ fuzzed guitar, becoming a hit in Europe, Australia and the USA. The B-side of the single A GIRL NAMED SANDOZ was a psychedelic ode to the Swiss pharmaceutical company which developed LSD. The follow-up single, SAN FRANCISCAN NIGHTS, issued in August 1967, came on the heels of the band’s famed appearance at the MONTEREY POP FESTIVAL in June 1967 and would be the band’s biggest hit, breaking the top twenty in the UK, Europe and the USA. The band’s debut album, WINDS OF CHANGE was issued in October 1967 and featured the singles SAN FRANCISCAN NIGHTS and GOOD TIMES, along with an inventive cover version of PAINT IT BLACK and the psychedelic rockers YES, I AM EXPERIENCED (a tribute to Burdon’s friend Jimi Hendrix) and IT’S ALL MEAT.

The album “THE TWAIN SHALL MEET” was recorded in December 1967 but not issued until May 1968 and featured two further singles, MONTEREY and SKY PILOT (Parts One & Two). Incredibly 1968 would see a further two album releases by the group in the USA and Europe; “EVERY ONE OF US”, recorded in June and issued in August of that year, was a fine album which saw ZOOT MONEY join the band on organ and piano, but inexplicably the album failed to gain a release in the UK. By the time of its release, Vic Briggs had departed to be replaced by ANDY SUMMERS (formerly with Zoot Money in the band DANTALIAN’s CHARIOT) on guitar. This line-up recorded the double album “LOVE IS” in Los Angeles in October 1968, issued only as a single LP in the UK, which featured imaginative cover versions of RIVER DEEP, MOUNTAIN HIGH, RING OF FIRE (also a hit single in many countries) and Traffic’s COLOURED RAIN. The album also featured the song GEMINI which segued in to a fine re-make of the DANTALIAN’s CHARIOT classic THE MADMAN (RUNNING THROUGH THE FIELDS). Released in December 1968, it was to be the final album by the group. Burdon remained in the United States and joined forces with the group WAR in 1969.

The set features the albums “WINDS OF CHANGE” (both stereo and mono versions), “THE TWAIN SHALL MEET”, “EVERY ONE OF US” and “LOVE IS”, all newly re-mastered from the original master tapes, along with ten bonus tracks drawn from the band’s single releases, including the classic B-sides A GIRL NAMED SANDOZ, AIN’T THAT SO and GRATEFULLY DEAD, all remastered from recently located original master tapes. Also included is an illustrated booklet with new essay and a replica poster. “WHEN I WAS YOUNG – The MGM Recordings” is a fine tribute to the music of Eric Burdon & the Animals.

THE TWAIN SHALL MEET
(RE-MASTERED EDITION)
RELEASED IN MAY 1968

EVERYONE OF US
(RE-MASTERED EDITION)
RELEASED IN AUGUST 1968

A-SIDE OF SINGLE –
RELEASED IN NOVEMBER 1968

B-SIDE OF SINGLE – RELEASED IN NOVEMBER 1968