2016/06/29:  It’s really hard for me to believe I’ve made it through all these years to the epitome of the OEMF – the 22nd festival was really a hallmark production!  It was so staggering for me, in fact, that it’s taken nearly five days for me to sit down & write this – my perspective of many of the performances I witnessed & absorbed (OTOH, I must offer up my sincere regrets for the performances I was unable to attend, due to several factors; the prime ones being “car trouble” and simply “gettin’ older”)!  The thing that’s really made this so amazing is how solidly the original organizers (Jim McAdams & Arrington Di Dionyso) have held to the bar of making sure that ALL flavors of “experimental” music were represented, and that they were represented (as nearly as possible) equally – not “just noise”, or “just jazz”, or “just blues”, or “just punk”… truly ALL varieties have been chosen over the years – and 2016 was certainly among the best!  What follows then, are my notes by night from the two days I was able to attend:

2016/06/24:  First-night shows are at a new venue for the festival – Obsidian; I stopped in about 4 hours before the “official” start, just to get a feel (I’d only been in here once before, just for espresso).  Nice laid-back atmosphere with a great play space in the back… good espresso, though not “rocket ship” potent (like mine at the house).  Went down to the Spar for fried oysters, then roved back here ’round five o’clock.  Still here way too early (as usual), so wandered on around the downtown stretch – the “Artesian Commons” in particulate – kinda’ ‘hangin’ with the hippies (or whatever labels are being hung on folks these days), if you will… nothing earth-shattering & in fact all the folks were pretty cool aboutg this 70-year old hangin’ with them.  Wandered back over to Obsidian about 5:30 or so to observe…

TGW (The Giant Worm) guys setup. TGW is a most interesting group & one of the players (Robert Shepard) brought his mom with him (retired music teacher), so I had someone to chat with (extensively) during the setup – cool!  Truly nice to see these guys back again… Robert handed me off a couple of CD’s for review, so those will be happening over the next couple of issues.  First sound-check for TGW happened right at 7:56, low crowd, but expect way more.  Fred Kellogg (the curator) spun off a great intro just after 8:00… they started off the set with a bit of ramble from spoken-worder with their normal fine sound-weave running as undercurrent & counterpoint… Almost a sense of Jim Morrison &* the Doors on their first tune & they are KRANKIN’ by the 16th measure (or so)… their moves are well-practiced even though they are fully spontaneous… Fred switches to a beatbox sound on the transition to the 2nd tune… something about how politics is about to dinosaur us into the 22nd Centure (if we make it, of course)… sax just SOARS on this piece… lots of great swirl stuff & they are REALLY on time – KICK butt STUFF!!  Nice sax intro from Robert on the 3rd piece, with muchly “random” flow – as the poet said “some strange”!  A truly great integration of soundscapes here… & a fine finale for the kick-off of the first set for the 22nd OEMF. 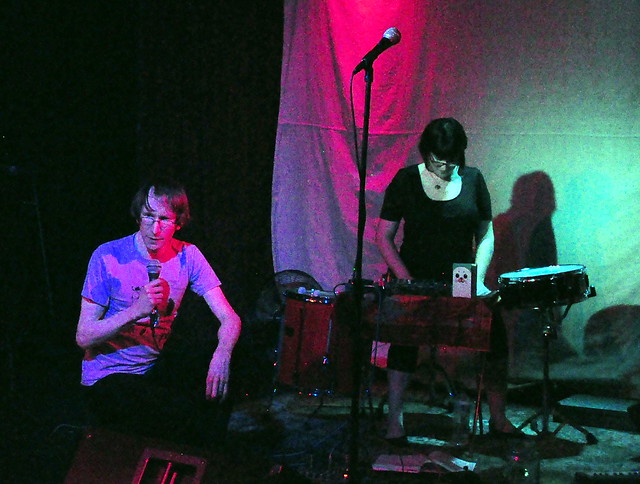 Next up is Fidget-Mantle Duo (from Shoreline, Washington)… I’d never heard them before (though Fred said that they’d been on the scene for a good long while), so this will be a new experience for these old ears…. “seaside ghosts & haunted mice” is the billing for them in the program sheet… will see (or hear)… some TRUE ghosts in there on Mantle’s sterling vocal… ‘eerie, to say the least!  “Frogs” is up next,   What’s so cool if they are NOT “just noise”, very good use of soundscapes here… gaping alligator jaws are present in their frog mix as well… all in all, a most interesting set… there are spots where I’m reminded of Davey Williams guitar & string antics with Trans Duo (with LaDonna Smith) – a compliment, in & of itself.  Spoo-kay!

Windtalkers (Amy Denio & Emily Hay) are up next & there’s no doubt it will be a true treat (& it was truly great to meet Emily after so many years of reviewing her great works… of course, she handed me off several CD’s for review, too, so look forward to my impressions on the newest releases from Emily in the next couple of issues)!  Amy’s vocals, with effects, are (as usual) FANTASTIC on the opener, then sax from Amy switches over to Emily doing slow/mysterious/echoed vocal stuff.  They are RIGHT ON time together, using the reeds & wind instruments to explore signals most of us have never before heard (much less imagined) – WIND TALKERS, indeed, lol – totally clean integration – I’ve no doubt that their recordings together two days from now will be “hits”!  Their next duo on clarinet & Afro-flute is simply superb, sonic healing form the ears, and it sounds like they’ve been playing together for years & years (which I believe, in fact, they have)!  When it comes to “on the fly” creativity, it just doesn’t get any better than this (especially since they had so much competition from the band next door) – total focus on “the moment”, & the audience is totally rapt, too – 2 very cool folks, calling the ancients to the forefront as we listen to their magic duo.  Unfortunately, I had to roll away as soon as their act was over, as the bench seats were KILLIN’ my old back; so I missed the last act (my apologies, again), Worshiprr.

2016/06/25:  I got home much later than I’d expected on the 24th, because when I went outside to start up my car (a 1966 GTO, btw), I had a fuse blown & a rather annoying “rattle” in the engine area… that almost made me decide to skip the performances at the “LeVoyeur” location, but after a bit of fiddling, I was able to (seemingly) correct the problem… nevertheless, I didn’t arrive until after 8:00 (the first performance started right at 8:00).  When I walked in, who should be sitting there but my long-time pal Wally Shoup, down to play with a trio… we had a great time catching up on various & sundry things, since their act didn’t start until 9:00.

Of course, I was most excited to watch the “Shoup, Horist Kikuchi Trio”  play; Bill Horist & Wally performed in various other configurations during (way) earlier festivals… they started right at 9:00… They were in FINE form, loosened up & went “out” almost immediately; lots of rapid trills & the drummer is ON!  Then some slower movements, with Bill furnishing effects aplenty.  Distinct lack of patterns, which (I know from personal experience) is just how Wally likes it!  Horist just SOARING on his guitar solo… only (very) short interludes for applause as they jump straight into the next piece… Heavy rhythms on this one & Kikuchi just SMOKES those drums.  Bill plays against a setup loop on the next round – the only word to describe this piece is – SWIRL!  A great free-form trio with a power-push punch that any lover of improv will go for!  GREAT set, guys.

It’s the Seattle-based Bad Luck up on the stage next… I’ve reviewed a couple of their CD’s (a while back), and was impressed then, but as I listen to the sheer wall of sound this fantastic duo opens up with; drummer Chris Icasiano and saxophonist Neil Welch work flawlessly together to create orchestral-sounding sound sculptures that amaze and hold the audience in complete suspense… I swear, I could hear cathedrals in there, too… their punctuality is particularly notable; every note & beat is right ON time… much different-sounding live than on albums, that’s for sure.  The best words to describe their performance are “elegant power”!  I can still hear some of the sonics in my head these six days later.  Neil described Wally as one of his heroes, and it’s easy to see that he’s learned well from the master.  It’s quite clear that these two just love creating NEW things.

The next act (and, as it turned out, my last one for the festival) is a group from Portland that call themselves the “Miserable Monokeys“… featuring NADYA KADREVIS doing clarinet, vocals; DAVID HANEY on keyboards, vocals, JEREMY SHASKUS, sax, bass clarinet and Will Lone doing drums… the main attraction (for this reviewer) was my acquaintance (and a few album reviews) with David’s work… he’s also the editor of Cadence Jazz Magazine, so he definitely “knows whereof he plays”.  They are performing as a “cover band” for many of the songs, for a British group from the ’60’s – an obscure flower rock band from the 60’s called  “Considerable Cunts” (C.U.N.T.S. was an acronym for the players in the band – bet it took them a lot of flowers – or banana peels, lol) to think that name up.  A roving improv piece starts the set, with David playing his keyboard on the floor (very sixties, no question), and Nadya kind of “directing” the flow.  It took them a bit to get into the “free side”, but once there, they are definitely TOGETHER; almost a wall of reeds between Nadya and Jeremy, with the piano & drums expanding the sonic palette.  They move into one of the cover tunes titled “You Can Have Anything You Want” in a much more relaxed fashion, with a strong freeform flow.  What made this group stand out, despite a bit of “equipment malfunction”, is that they are DEFINITELY different from what you expected when you saw them on the bill, or saw their posters on the web.  I’ve no doubt there will be an upcoming release of some of their performances of this material, and will definitely look forward to reviewing it.

That pretty much wrapped it for me… as I said earlier, very sorry I had to miss Sunday’s performances, but in the final analysis, this was the BEST OEMF yet, and I’ve no doubt there will be many more to come.  Thanks to all the players, the organizers & everyone else who supported this marvelous event!