When I reviewed Tyrone’s excellent new CD in issue # 141, I decided (right away) that I wanted to find out more about what “makes this player tick”.  He turned the interview around right away, and here are the results – a comprehensive and insightful interview for your reading pleasure! 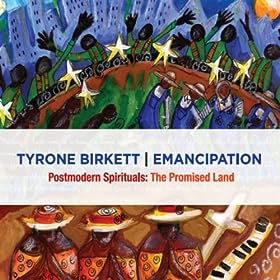 Zzaj: The material I’m reading makes it sound like you’ve been in NYC for a long time… am I correct in that, or did you grow up elsewhere, then move to NYC? Either way, please give us an “off the cuff” bio sketch that tells us where you came from, who/what made you the player you are today & where you see yourself (& others in your life) 5 years from now.

Tyrone: I grew up in NYC between Harlem and the Bronx. In elementary school I was a horrible clarinet player so they gave an alto saxophone. Immediate affinity. Soundwise and even the physicality of it. I did not own one yet, so the school gave me one over the summer. All summer with two big fans, a fingering chart and a bunch of reeds I worked it out. Studied classical saxophone and jazz in school, played in church every Sunday. I lived off of Jamey Aebersold and transcription books when I didn’t have mentors or teachers. The rest is history as they say. In five years? Just really expanding what I’m doing now in more recording and performing. Hopefully by then I would have taken my concept worldwide and it would be financially viable and stable.

Zzaj: It’s obvious from your sax performances that (John) Coltrane was an influence.. who else would you say has influenced your musical outlook most strongly (& why/how)?

Tyrone: John Coltrane is a huge influence in that I hear in him the full breadth of Black music. Work songs, spirituals, black church music, early r&b, of course the blues, bebop and modern jazz… Being “postmodern” I look to widely disparate influences such as Bird, Thomas A. Dorsey, black musicals and shows, Wayne Shorter, Stevie Wonder, the moans of the old church mothers, Arvo Part, Debussy, Walter Hawkins, movie scores. I think that’s enough, I don’t want to de-code my music (laughs) I’m listening to the great African-American composer Coleridge Taylor Perkinson currently. I love the things John Escreet, David Binney and Donny McCaslin are doing currently.  I’m highly influenced by anything that is authentic and stretches the imagination. And that is somehow conscious of the fact that music is inherently spiritual.

Zzaj: In order to accomplish your vision of “re-imagining and reviving the Negro spiritual through jazz”, what do you have to do to prepare yourself? Is it a matter of reading, watching, listening and experiencing, or just something that comes from your soul?

Tyrone: A lot of researching went into this project. I studied not just the music of the Negro spiritual but the social and historical context from which it emerged. Even going into doctoral dissertations a few times. I listened to everything I could find time permitting on Negro Spirituals. The Smithsonian, Alan Lomax, Sweet Honey in the Rock and so on. I also checked out Max Roach and Charles Mingus and their approaches to freedom songs. Still studying as I continue this project. That’s just a sampling of what I’ve been studying.

Zzaj: I’ve noticed that you are heavily involved in benefit concerts… does that mean you believe that music has the power to heal the heartaches folks have?

Tyrone: Western culture questions the healing power of music. But for the rest of the world that question has been settled for thousands of years. I’m trying in the little piece of world that I have available to me to bring music that is curative and refreshing as well being creatively inspiring. And to partner with entities that are committed to making this a better world.

Zzaj: Did you do formal musical training for your wonderful reed playing? How important is formal training as opposed to just “having the music in you”? Or are both equally important?

Tyrone: I did formal training early on, started in grade school. From there I studied on and off with private teachers. I studied music in college with a degree but I am mostly self-taught on saxophone, but mentored by greats like Budd Johnson and Frank Foster. I actually met Frank Foster in the church I played in as a kid! He slipped a note of encouragement underneath my chair while I was playing. We stayed in contact over the years until right before he passed. I think formal training is important for basic technique and musicianship, however you really discover some unique things when you work it out on your own. So a combination of both is preferable. Thinking about someone like George Coleman, Errol Gardner or Earl Bostic.

Zzaj: What are your plans for touring? When/where, and how important is being on-the-road to your various projects?

Tyrone: Currently we’re confirming some East Coast regional touring, Florida to Canada. Sometimes it is hard to place our music in venues, but as we go on it is getting easier. We will be in the NY tri-state area this spring as well. On the road is the best way to gauge what is resonating with audiences and to be able to extend our reach. Most of all, the enjoyment of a two way sharing between us and the audience. And meeting new people along the way. It’s worth the traveling issues.

Zzaj: I notice that you and your wife Paula work together; how long have you played together? (by the way, your duet on “Motherless Child” – Revisited, was supercharged, I thought).

Tyrone: My wife and best friend Paula Ralph-Birkett… We started working together before we even got married, in the late 90s. She is the voice that helps to make the concept more concrete as the music itself can be more abstract in meaning. Also having her sing makes the whole thing more accessible. She is a force of her own and she is still growing by leaps and bounds as an artist! We’re working on her project now.

Zzaj: This may be a question you don’t often get asked, but I’m wondering how you see rap & hip-hop music… are they part of the freedom movement you’re a part of promoting, or only a passing fad?

Tyrone: I do hear the question sometimes because, at least currently I don’t incorporate it much in my music. Hip-hop is probably the most powerful tool we have today to speak for the disinherited and the disenfranchised. The cultural appropriation of it and the materialism attached to it have rendered what it has become irrelevant to today’s issues. But there are artists such as Jasiri X who are trying to use hip-hop to affect change. There is some hope there. It is not a fad.

Zzaj: I’m assuming that the “freedom song” you speak of applies to all, regardless of race? Am I correct? Why?

Tyrone: The freedom song is a universal thing across all cultures. Sad to say because of the human condition, there are and have been the oppressors and the oppressed throughout history across the globe.
The freedom song has been the response to oppression whether it be The Troubles in Ireland, apartheid in South Africa, as well in America today past and present. I just approached the freedom song from my own culture, experience and knowledge living in America.

Zzaj: We have many aspiring artists & players in our readership; what are your words of wisdom to them about whether music is worth pursuing as a career?

Tyrone: Do not do it unless you know that you cannot live without doing it. You have to be in it for the long haul. Be balanced spiritually and emotionally, be financial literate, have a good support system if possible. Be yourself and be true to your art. Have a personal approach and voice and don’t be just another gigging musician. Unless that is your calling of course. Lastly seek out mentors. It will save you a lot of time and hard lessons. And love your audience. No matter the circumstances in which you’re playing.