A whole host of bands have been pushed to us from one of my old stomping grounds – Huntsville, Alabama.  During my (dozen or so) years there, I had occasion to meet many of the players being talked about in this interview… my thanks to Keith & Jim for taking the time to give us some insight into their band! 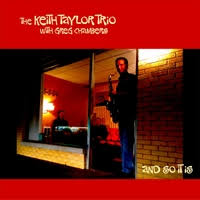 Zzaj:  I spent a few years down Huntsville way, hooked-in with jazz/blues characters like Joe Hardin, Pat Huggins, Avery Burdette & quite a few others; who are your “jazz characters” in the area? Also, give us a short bio sketch that tells us where you came from, where you’re at right now & where you expect you’ll be in the next 3-5 years, please.

Jim: Some of the local jazz/blues characters (besides us, of course) might include blues guitarists like Microwave Dave Gallaher and Danny Hall; several jazz groups like Devere Pride Trio, Abstract, Watters/Felts Project, Rolling Jazz Revue; even rock bands that tend to stretch out quite a bit like Toy Shop, Dawn Osborne Band, the Snake Doctors and my own band Trio El Camino; freelance characters like percussionist/poet Duke Way (with whom I’m currently producing an album). It’s a long list.

By the way, I’m Jim Cavender, I’m from right here in Huntsville, I try to keep my head above water playing guitar and bass in as many bands as I can as well as performing solo, and I’m now trying to run a record label (Startlingly Fresh Records) featuring as much home-grown music as possible, including the Keith Taylor Trio. It’s probably what I’ll still be doing in the foreseeable future.

Zzaj:  Who has been the biggest influence on your own jazz playing? Why?

Keith: As I was developing my style and technique, I listened primarily to Bill Evans, Chic Corea and Keith Jarrett. I really love Kenny Barron’s playing also. As a young man, I was introduced to jazz by a mentor who also coached me along for a while. His name is Tom Winstead.

Jim: I listen to a lot of different kinds of music, and it all influences me to one degree or another. I love jazz bass players like Charles Mingus, Charlie Haden and Paul Chambers, but I also am heavily into the r&b bass playing of James Jamerson, Tommy Cogbill and Chuck Rainey. Around here, guitarists like Danny Hall and the late Eddie “Spanky” Alford are unavoidable influences, too.

Zzaj: Do you, or your musicians in the trio, play live, or primarily in studio? If live, where?

Keith: We perform live primarily. The most consistent venue for the trio is a place called Shea’s in Huntsville. It is a Saturday brunch gig which I am a part of on a weekly basis. I rotate a number of jazz players to perform with me, including the trio.

Jim: Keith has a house gig at a local restaurant called Shea’s Express on Saturdays, and about once or twice a month all three of us play there together. We do some playing elsewhere on occasion, and we even get together as part of the jazz faculty group at UAH sometimes as well. Our studio experience has picked up a bit lately. We’ve put out our second CD in five years, we’ll have a third ready soon, and we did some of the accompaniment on that Duke Way CD I’m producing.

Zzaj: Is your playing based more on musical education, or on your “internal musical clock”?

Keith: I am an educated musician, with a BA in piano performance and a masters in jazz. The “internal musician” is an essential ingredient also. You gotta have something to say to be heard.

Jim: For me, it’s definitely more internal than actual education for the simple reason that I never majored in music (I studied journalism), although I’m trying to catch up. I just completed a semester of Keith’s jazz arranging class at UAH. I learned a ton, but it was pretty exhausting!

Zzaj: What musical endeavors do you have coming up in the near future? Any plans for touring?

Keith: I don’t think I’m likely to do any extensive touring unless it is with another band I play in called Watters/Felts Project. They have released a cd with Summit Records which could open some doors and provide opportunities to tour.

Jim: Probably just continuing doing what we’ve been doing, gigging and putting together a CD whenever the mood hits us. We’re all married guys rooted here in town, so I don’t foresee any touring, but if somebody wants to sponsor us I wouldn’t object.

Zzaj: If you had the opportunity to play with one individual or group, who would it be (& why)?

Keith: I feel privileged to play with the talented musicians who are presently in my surroundings …. Greg, Tom and Jim are at the top of that list.

Jim: For me, playing with Wayne Shorter would be beyond my wildest dreams. I’ve been into his playing and writing since high school.

Zzaj: If you believe, as I do, that music has the potential to heal most of our ills as a society – why? If you don’t believe that – why?

Keith: Well, certainly music has great power and is often common ground to people of varying ideologies. So yes, I believe music can and does elevate the “character” of our society.

Jim: Well, as someone who comes from a rock ‘n’ roll background, I’d say music has already proven that potential a number of times during the ‘50s and ‘60s, and it could again if people would just listen. For now, at least it keeps us out of trouble.

Zzaj: Do you play live on a regular basis? If so, where?

Keith: In addition to the Shea’s gig I mentioned earlier, I have been playing a restaurant called Café Berlin two or three times a month as of late. A private country club called The Ledges provides some work for me regularly. Periodically, I play in concert settings with Watters/Felts Project and at UAHuntsville, where I perform with other members of the jazz faculty. I’ve been playing here and there with a singer in town. Her name is Roberta Silva. She is a lot of fun to work with.

Jim: I play all over the place. I’m kinda hard to avoid around here. I do solo singin’ and strummin’ gigs every month at a pizza place called Sam & Greg’s and a restaurant/bar called Stem & Stein, but I’m usually playing somewhere all the time.

Zzaj: How long has your trio been playing together? Where did you first hookup?

Keith: Jim and I have played together off and on for 25 years or so. I guess I first played with Tom something like 12 to 15 years ago. Huntsville is a fairly small town with a jazz community where we all know each other.

Jim: I’ve known Keith since the mid ‘80s or so, and started gigging with him around ’87. Me, him and Tom have been working together for at least ten years now, although I’m not certain exactly when this trio officially started. We sort of drifted into it.

Zzaj: Many jazz players in the making read our magazine… please give them any insights you have on the questions… “Is pursuing a musical career worth it?” “What sacrifices (if any) must be made in order to have a successful career in music?”

Keith: The sacrifices are many. One has to be dedicated to one’s art and instrument. Practice time in place of many of the pleasures of life is part of the equation of course. Uncertainty about financial security is common. Uncertainty about one’s acceptance by the audience and other musicians is probably more troublesome. I would say you should pursue I career in music if you feel compelled to do so, like it is unavoidable for you.

Jim: Get used to the idea that you will probably never become a millionaire doing this. Once you make your peace with that, you’ll enjoy yourself. If it’s money you’re after, be a lawyer or a day trader or whatever. But if you want to play music, play the music you love. Don’t play something you wouldn’t otherwise be listening to just because you think it’ll make money