Readers who have been with me for many years know that I’ve been associated with this festival since it began, around 1995.  The organizers pulled together a WHOPPING group of players for this 20th year, and I’ve sketched out a few impressions of the acts I was able to witness (there are actually a few more acts, but I wasn’t able to be there for all of them).  Enjoy – & SPREAD the WORD to others – I full well expect this event will continue for another 20 years (or more)….

NOTE:  I will be updating the photos over the next couple of days with better ones taken and posted by Seattle photographer Joe Mabel – my sincere thanks to Joe for furnishing these!!!!) 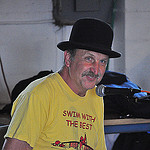 Opening night was the 27th of June, 2014, at The Northern… I was a bit skeptical about the venue at first glance, but (in some ways, at least) this turned out to be a better space than others the festival had in past years; the first act I witnessed was Big Tom the Lithuanian ((the photo was taken and posted by Seattle photographer Joe Mabel)… what an absolutely splendid way to open an all ages event.  Tom told jokes over some well-played classical keyboard riffs… he set a nice light tone for the upcoming acts, & made us all (well, me at least) feel good about being there!

The rest of the acts for this first night were great, too, though (unfortunately) I wasn’t able to be there…. I do have photos & perhaps some video coming my way from the organizers – so check back on this page – I’ll be posting some of that as it’s received. 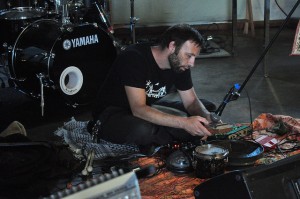 Unfortunately, I was unable to watch J.D. Helwig’s act this year… based on previous festivals, though, I know his act was total quality!!!

(this photo was taken and posted by Seattle photographer Joe Mabel): 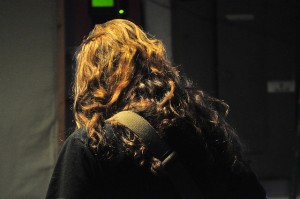 Knot Pine Box was the next act up… again, I wasn’t able to watch this one, but will be sure to during the next fest!  Solo guitar, effects & mikes from Karen Hancock.

(this photo was taken and posted by Seattle photographer Joe Mabel) 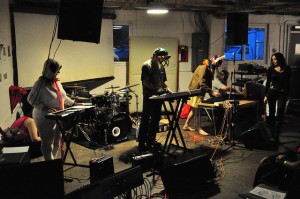 Dead Air Fresheners, w/ Jennifer Robin (featuring Ricardo Wang) is a class act that I’ve watched many times during previous festivals… truly wish I could have been there, because (as you can see), they were a total riot (Note:  I may have some sound files from Ricardo soon & will post them here, too.  (this photo was taken and posted by Seattle photographer Joe Mabel) 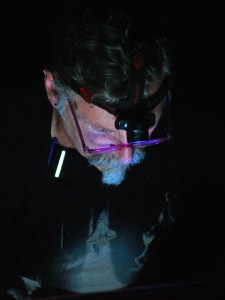 Peter Randlette, who has been responsible for exposing many of the artists’ in this festival to the endless possibilities of sonic creation, was setting up when I arrived for this first night.  I was indeed sorry to have missed his set, but will ensure I’m there for the next showing.

(this photo was taken and posted by Seattle photographer Joe Mabel) 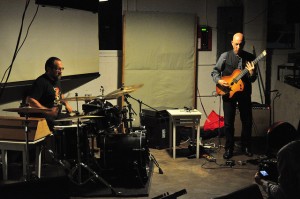 Elliott Sharp    performed both solo and with drummer Joe Trump for this year’s festival; though I wasn’t able to be there for his performance this year, I have watched him (and reviewed his work) many times before… it was genuinely nice to have him be a part of this 20th year celebration. This performance wrapped up the first exciting night of the festival. (this photo was taken and posted by Seattle photographer Joe Mabel) 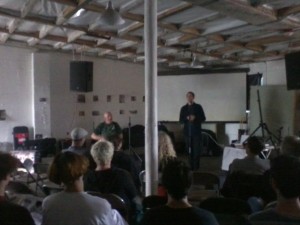 The second night opened with some totally interesting “beat box” work by Fred Kellogg (he’s also a DJ on KAOS, FM 89.3 FM, hosting a weekly show called “Free Jazz with Fred“… as you can see from the pic here (& one below), Fred did the box from a chair while Brent Athey (another KAOS DJ) did some (very) free-form spoken-word…. 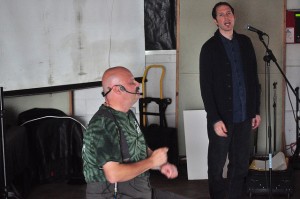 Parts of Brent’s “white-boy-rap” under his pseudonym of “The Furious Force” may have not been strictly “all-ages”, but the pair was highly entertaining & fully emphasized the freedom that jazz can bring – even to old/young white dudes… lol!  I enjoyed this more than I thought I might have, & will be checkin’ out both of their shows in the future – to be sure.  Lots of folks in the audience found this to be highly entertaining as well.  Kudos to Fred & Brent for their high-energy performance – what an absolutely splendid way to lead off the second night of the 20th festival!!!  (this photo was taken and posted by Seattle photographer Joe Mabel) 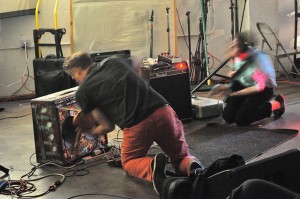 “Chaostic Magic” was up next…pace was darkened down so much I was unable to get any snapshots of this one…. pure wall-of-noise stuff from Eric Ostrowski (who used to play with the departed Michael Griffin at the festival in years gone by).  I was reminded of another noise group (Borbetomagus)… interesting, especially if you dig total attacks of sonics that don’t compromise; buzzsaws don’t come anywhere near this energy level. (this photo was taken and posted by Seattle photographer Joe Mabel) 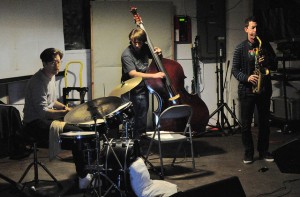 The next act up was invited to the festival by Fred Kellogg…. Ton Trio II, featuring Aram Shelton on alto saxophone, Scott Brown on bass & Alex Vittum on drums.  For this listener, this was a definite highlight, & shows that Fred knows what he’s talking about when it comes to jazz!  Some good structure & tight playing, with solid improv skills totally in evidence all the way through.  I’m surely hoping that Aram & his crew can make it back for next year… any way you listen to it, this is a group to keep your ear on… they will be doing BIG things in the music world!!!!  I will definitely be seeking out their music for review in this magazine – MOST HIGHLY RECOMMENDED for all who love jazz that’s what jazz was meant to be!   (this photo was taken and posted by Seattle photographer Joe Mabel) 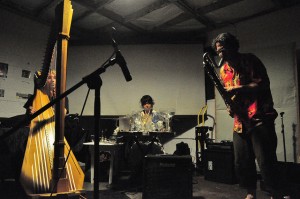 Our long-time friend Arrington De Dionyso was up next with a grouping called “Psychic Fire Ensemble”.  Absolutely cool sounds, like nothing you’ve ever heard before – and, as anything Arrington does – that’s exactly what it’s supposed to be… something to stir your imagination and resonate within your soul.  Out there, but totally accessible.  The other members of the trio were Graeme Smith on some astounding harp and China Star doing “glasses”.  I have listened to a lot of Arrington’s work over the last 25 years, and I can tell you that this set was the most universal I’ve ever heard him do.  The audience was totally spellbound, as was I!  Some truly amazing work. (this photo was taken and posted by Seattle photographer Joe Mabel): 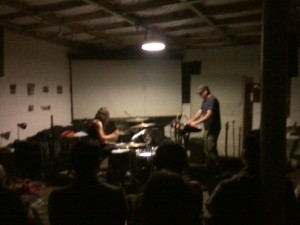 My pal Thollem McDonas was up next… it was interesting, ‘coz I got to take him for a short sprint in my 1966 Pontiac GTO just before the show, when he arrived with his cohort in the “Impulsive Machinations” duo, drummer Sara Lund.  This is actually the first time I’ve heard Thollem doing electronic keyboards (he always did acoustic piano at the previous festivals, & on the many CD’s I reviewed from him).  What I can say, without fail, is that the sheer POWER these two generated would be enough to fuel the whole Left Coast for many years to come.  Sara’s drumming is some of the strongest I’ve ever heard, and the duo was “right on time” in every sense of the word.  Not only that, but as I told Thollem – I swear I heard my GTO in one of the songs…. 389, three deuces & all… lol!!!  Watch their set below: 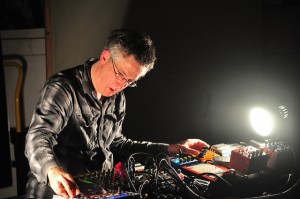 Last up for the evening was Mark Hosler, who played in the very first festival as well.  You can see from the picture that he’s doing electronics… but his work is far and above just labeling it as “electronic”.  Yes, loops and samples abound, but he is clearly playing those boards as a well-accomplished player (he’s also part of the famous band Negativland). The truly amazing thing about his music is that it subtly wraps you right in, and fills the spaces in your brain with images you never knew were there…. not only that, but this is all accomplished with sheer, unadulterated artistry… not just a “wall of electrons” attacking your head (though there are sections where some of that may happen) – but more like a sonic painter who helps you see what you’ve been missing.  Very enjoyable!  (this photo was taken and posted by Seattle photographer Joe Mabel)

The last day of the festival was Sunday, June 29th… unfortunately, I was unable to get good pictures of the acts, though I did sit in for a few of them.

Overdose the Katatonic — with James Trash – I did get to watch this one… sheer energy & noise!!!!

Derek M Johnson did post a VID of his performance that you may want to check out, too.

Here’s a shot of the Malaise performance!!!

The REPLIKANTS were the last act on the bill for Sunday.

Just so you’re aware of what I was unable to sketch out for you, below you’ll find the full schedule for this 20th year grand event:

I was greatly pleased to see the high talent that performed this year, and have no doubt that future curators will keep the focus on pulling in the most creative acts possible from everywhere on the planet.  This was the best fest yet, and I’m extremely pleased I was able to be there!