6/28/2014, 15:00 – It took me a half-day to recover from the stellar group I witnessed last night!  The Jefferson Rose Band played at my favorite jazz haunt these days, Rhythm & Rye.  I got there early, as always, & got to speak with the percussionist, Ahkeenu Musa, while he was setting up.  Jefferson slid in an hour or so later – totally cool dude!  After a rather long sound check, the opening band, “The Funk Agency” (pictured below), opened with some gritty (& at times, disturbing) pieces. 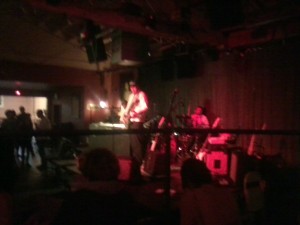 Some great finger-pop bass-line stuff, with Rhodes & heavy drumming goin’ down!  Enjoyed the Rhodes, but would have liked a bit more riffing on the solo lines.  The bassist/lead singer was quite capable of power projection, & lots of dancers hit th’ floor.  All-in-all, an enjoyable set. 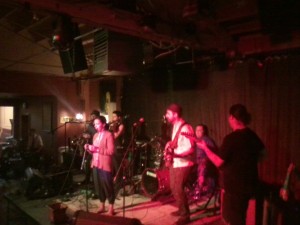 Jefferson Rose Band hit the stage right after the front band tore down… there’s one word that best describes their energy for this ol’ phart – ACCOMPLISHED…. straight-ahead Latin, great percussion, strong drums & horns (trombone & sax) that were all “right on time”!  Jefferson’s bass DRIVES this opening tune – excellent uptempo, no slacking – exactly the kind of music/spirit Oly needs!  On the second tune, Alex Kitchen’s vocal projects some serious FUN, with some lovely percz from Ahkeenu.  Lifts you right on UP! 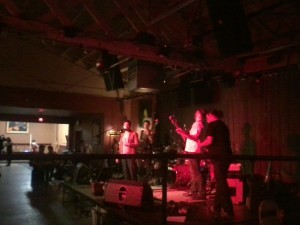 The third tune, Primavera En Barcelona, had a great lead guitar intro, with some excellent flute joining the trombone – thoroughly enjoyable, & after Jefferson invited folks to “do the dance”, things really started to MOVE.  This show was the first (of a series) of release parties for the bands’ July release, “Feel Like Dancing“.  You can read my REVIEW of this excellent CD in issue 144 to get my thoughts on their high-talent, high-energy playing.  This is definitely a band to keep your ears on – ‘coz I predict you’ll be hearing a LOT more from them!  Great band, great spirit & a great show!  Thanks Andy!!!

Royal Room to meet Satoko Fujii & her husband Natsuki Tamura… this is what it looked like when I arrived at around 2:30pm (their show wasn’t until 6:00 pm).  Nice stage and a very pleasant crew of folks in the Royal – I liked it a lot.  Since I was so early (& a bit hon-gry – hadn’t eaten yet), I wandered ’round to look at all the little shops & eateries… as I walked past the Columbia City Theater, I saw a very familiar face – Dennis Rea, who I’ve been reviewing for some many years now, was standing right outside the theater – after the normal pleasantries, Dennis let me know he was there to perform as part of the 2014 SeaProg festival (more about that later).  After visiting a local eatery, I found a place in the shade to just sit & scope out all the interesting folks who were out & about – it was a beautiful day, by the way!  Around 4:00pm, Satoko, Natsuki & the rest of their four-piece came wandering by the bench I had parked myself on, so I got to meet/greet them briefly before they went on to the venue… it took a while for their show to start (it was supposed to begin around 6:00pm, but didn’t get started until 6:40 or so).  Here are my thoughts on the formidable show they presented: 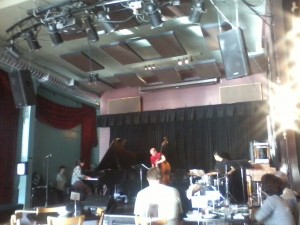 The first piece was a trio, with Satoko on piano, bass performed by Todd Nicholson & drums from Takashi Itiani…  excellent bass on the sound setup, with some “right on time” solo tradeoffs & a fine drum solo!  There’s no question that this was one of the most dynamic jazz trios I’ve heard (yet) in 2014.  The second piece had the bass & drums opening & then a great piano build to total organized frenzy, with lots of room for all the players to move around in.  Absolutely too cool! 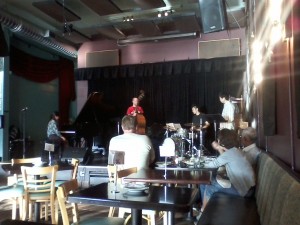 Natsuki’s trumpet opened the third piece with overtones from Satoko’s piano, with bass/drums moving in slowly, and a well-defined buildup to crashing drums & cymbals…. this piece was full of structure, but remained ethereal and fully satisfying to listeners who love to be “in the zone”.  a beautiful drum solo ensued ;& lots of energy-packed improv…. almost classical piano chord runs when Satoko joined back in, with wonderful swirling movements that had everyone in awe.  There were several more pieces we all enjoyed immensely… what absolute joy to (finally) meet & watch these most accomplished players after nearly 20 years of reviewing their works!  GREAT to meet you all!

After the rushes from Satoko & Natsuki’s great performance, I wasn’t sure if I could handle a lot more stimulation, but when I slid into the 2014 SeaProg festival, the Portland trio “The Mercury Tree” was smashin’ & bashin’ on the stage in the Columbia City Theater… my longtime musical accomplice in crime, sound engineer Peter Comley, was in the back of the stage room, so we shared in the total abandon this band was generating…. heavy effects, lots of swirling sound, with lots of steel & crashing drums throughout!  There’s no question after listening to these high-energy young players that the revolution is not only “on the way” – it’s pharkin’ HERE, & with music like this, you know it’s right up in yer’ face – in super stereo.  As always, my thanks to Dennis for encouraging me to partake of this great rhythm band & the 2014 SeaProg Festival.  What absolutely smashing energy!!!

Last up (for this ol’ codger, anyway) for the nite was “Tempered Steel“, which featured Dennis, Ffej & Frank Junk on electronically amplified thumb pianos.  3-piece with lots of effects, but straight-ahead playing; no smoke/mirrors (well, maybe a hookah or two in the back-room…. absolutely smashing flak-ed they were); percussion-based rhythms that explore the edges typical of most anything Dennis is involved in; yet very different from the albums I’ve heard him do before.  Nicely dense, but rich with nuance – music that would attract demons (nice ones, of course) with overtones of heavenly chiors – a DEFINITE original sound that we all enjoyed in totality!  My view of the SeaProg Festival 2014 is that it’s a stunning & inspiring event (still going on tonight, by the way)!!! 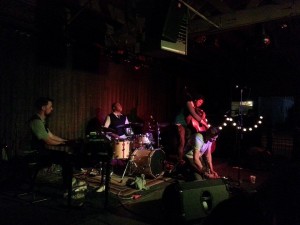 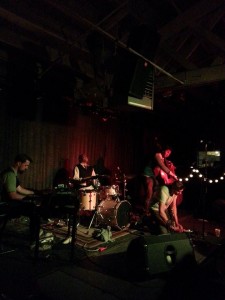 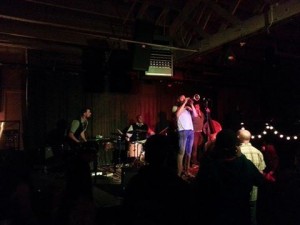 6/7/2014, 14:25 – You’ve heard me speak before about the latest jazz haven in downtown Olympia – Rhythm & Rye is poised to become the HOT-spot for the Northwest.  The band you see pictured here is called “Industrial Revelation‘, and I will tell you – they can COOK… & cook they did, last night!  They were a tad late getting started (supposed to start at 9:00pm, didn’t actually start up until around 10:00pm… but it mattered not a whit… they captured the audience on the very first tune & continued to jam out all-original jazz/funk that held us all spellbound!  The bass player, Evan Flory-Barnes, was so into the “throb” of it, that he almost couldn’t keep his head on – lol!  The trumpeter, Ahamefule J. Oluo (who I left a press card with, by the way), just stepped right UP to it & didn’t stop his high-intensity playing for the entire set.  The drummer, D’Vonne Lewis, has his own time… & that’s not a bad statement… this cat kept it all MOVING!  The Rhodes player, Josh Rawlings, had a whole host of gadgetry/boxes on top of his axe & used them all to great effect (no pun intended (well, maybe a little bit).  A group like this, with their total energy & well-rehearsed pieces, will always capture your attention & hold it.  I’m totally impressed & will look forward to review copies of their work. Andy Geertsen has done an excellent job of getting Oly back on the “Great Nor’West jazz map”, and is to be congratulated, in spades, for booking solid acts like this one in for the enjoyment of all of us who demand “different” & “not stale” in our live performance venues.  GREAT band!!!!

6/2/2014, 18:00 – I just received some superb news… pianist Satoko Fujii and her husband Natsuki Tamura will be playing up in Seattle on the 21st of June… I’m going to get to meet this marvelous duo after nearly 20 years of reviewing their excellent work together (in various configurations)…. too cool!

On another note, I got  a CD in from a guitarist, Greg Chako, who I hadn’t heard from in several years… I reviewed in in issue # 82 and before that in issue # 77… as you’ll see if you read the reviews, he got a “PICK” both times… his latest effort will be reviewed soon here… in the meantime, Greg could use some help – like many of us, he could use a contribution to help him keep his music going… you can DONATE to his excellent cause via his Paypal account, or just contact him at jazzman@gregchako.com.  I can tell you – this player deserves it!!  In addition to donating, you may also want to buy his new CD, “Where We Find Ourselves“!!!!