NOTE:  This page may take a minute or so to load, due to the amount of embedded videos… please be patient!!!

10/14/2014:  The folks in th’ magickland of OlyWa seldom realize just how great they have it, jazz-wise, anyway!  I was able to watch Dan Blunck‘s “Existential Trio” at the Rhythm and Rye last night; Dan’s superb reed work, with bassist Ariel Calabria and drummer Steve Bentley make up the trio, & to top it all off, they were joined by a poet from Seattle, Paul Nelson, for some of the best live spoken-word/jazz work I’ve heard in a long time!  It has been many years since I’ve heard Dan play (since 2009 or 2010, I believe), and those efforts were not with him as the leader (I think he was playing at Bert Wilson’s house when I heard him last)… Rhythm & Rye is an absolutely cool venue for spoken-word, & the jazz was “in the air”, so to speak.  I got to chit-chat with Paul & Dan a bit before the show got started, which always makes it better – that personal connection always makes the groove go smoother, somehow.  The show started (nearly) on time, at 8:00, with a totally cool instrumental intro; Dan’s sax work is in fine form, excellent bass & drums that just won’t quit… some very adventurous solos that blend together in a nicely strange way; everything on this tune is “right on time”… a very fluid tune that sets the stage for Paul’s spoken-word (up next).  When a poet takes the stage, you know (right away), that they (either) “have it”, or “don’t”.  Paul’s clearly got the presence, & has the audience eating out of his hand in only moments… he alludes to his first piece as something that kinda’ “out-Monked Monk”… lol!  Rhythm from the players only takes about 10 seconds to establish, & (again), the players are ON it… a thoroughly enjoyable piece!  “American Haikus” (my apologies, Paul, if I didn’t get the title exactly right – turns out it was “American Sentences”, per correction from Paul – thanks, man!) is up next… random images from Paul’s experience album… excellent weave, with total wander for a GREAT conclusion to the tune.  This was some of the most creative (yet relaxed) jazz/spoken-word I’ve heard this year… Dan & his trio truly know how to “gauge the play” for maximum artistic benefit.  Another super-show from our friends at R&R… highly impressive, without doubt… & MOST HIGHLY RECOMMENDED for adventurous ears across the Puget Sound!

9/30/2014:  Here’s some great jazz from our friends in Poland contact Andrzej Rejman for more information on this great group: 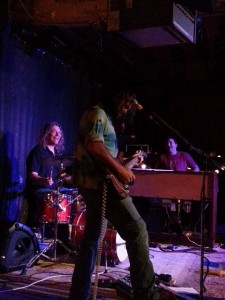 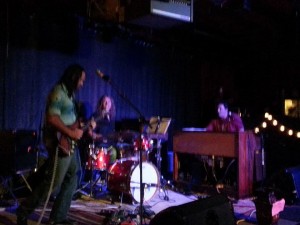 ria (Hammond organ), RL Heyer (guitars/effects) & Mike Stone (drums), you won’t walk away from it disappointed – man, these guys COOKED IT last night!  I got to meet & talk with Joe & Mike briefly outside in the smoke cube... that’s another totally cool thing about R&R… you almost always have an opportunity to yak it up a bit.  Joe made it plain that the music would be strictly “Van Halen” & nothing but… & he wasn’t kidding when he said that.  “Can’t Wait To Feel Your Love Tonight” had a slow guitar/organ build to total rawk-out… they played some excellent changes, and the guitar leads were true scorchers…. Mike’s drums propelled the tune like something you’d see launching from a rocket pad!  “Long As We’re Together” was pure fire, & this high-energy, high-talent trio pulled it off without a hitch…. again, the guitar leads from RL Heyer just SOARED into the wild blue… & Joe’s Hammond was absolute KILLER!  For the dancers in the house, nothing could’ve been more satisfying than their rendition of “You Really Got Me”… the kind of energy this trio displayed on this tune is just what the magickland of OlyWa needs to keep it alive & well.  If ever you have a chance to check this band out – do NOT pass it up… the players are more than “just another trio”… total talent & pure/raw energy will pull it all together for you & make your night one of the most memorable you’ll ever have – absolute FUN on this one… thanks for inspiring our town, InHalen – hope you’re back up on our stages again soon!!!!

9/22/2014 – Rhythm & Rye is turning out to be “the” place to be for jazz in the majickland of OlyWa… my friend Charlie Saibel told me about a jazz singer named Don Cohen & let me know that Don’s D.C. Quartet +2 would be playing (Don on vocals, harp, with Daven Tillinghast on guitar, Steve Bartlett on bass and Mark Stout on trombone, along with special guests Craig Cootsona on drums and Dave McCrary on trumpet and flugelhorn), I knew I couldn’t miss it… Steve Bartlett and I go way back, & I’ve seen many of the other players in various groups around town.  I got there a bit early, & was able to talk with Steve & his wife Jan a bit before the band got up and did their sound check.  What came across most clearly during the first couple of numbers is that these folks just LOVE playing for folks!  This isn’t “nu-jazz” by any stretch of the mind… lots of trad tunes that hearken all the way back to Frank & the gang (that’s Sinatra, not Zappa… lol)… “All Of Me” featured a strong vocal from Don, & had lots of great energy rollin’ in just the first few bars.  The horns were a truly nice addition and lent some real authenticity to the late-night smoky room atmosphere they seemed to be going for.  “Day In, Day Out” didn’t exactly “do it for me”, as the pace was a bit slower than I’m used to… but, they picked right back up on “Fly Me To The Moon”… all the players were together & on-time… I really dug Dave’s muted horn solo on “Moon”, & then the guitar jumped right in with a fine solo to close out the set.  I stayed for the opening tunes of the 2nd set (gettin’ too old to stay out for the whole night)…. “Green Dolphin Street” was done very nicely & had great energy!  Don & crew will be playing at various other venues around town, so check them out as soon as you can, especially if you’re in the mood for some jazz that takes you back to where it all began.  A fun night!

9/20/2014 – Tomorrow I turn 68, so (of course) I need to do something that will “take me back” a few years…. make me feel like I was 28 again, yah?  So I went out to the South Sound Speedway tonight and watched a few of the stock car races…. that’s out in Rochester, so it was a way for the GTO, but it surely made me feel like I was back at the track… what a kick…. greasy-burger & all.  I’ll make up for that unhealthy chunk o’ fat tomorrow with a nice plate of fried oysters at one of the local restaurants downtown…. who could ask for anything more!