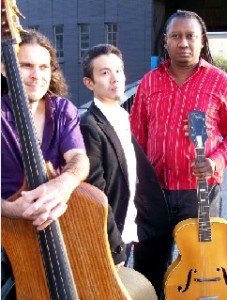 After reviewing 2 of Ron’s recent CD’s, his versatile and high-energy approach to jazz guitar made me decide that readers would be better off for getting to know him.  Ron’s schedule is jam-packed – so my hat is OFF to him for squeezing in the time to give us excellent insights to who he is as a player, person & performer!  THANKS, Ron!!!!

Zzaj: I see (from your brief bio on FB) that you originally came from the Philippines & that you’ve been all over the world… our readers always like to read, in the artist’s own words, where they came from, where they’re at now & how they got there… please give us a fresh-perspective bio.

Ron:  Well my father was a Marine and I was born in Subic Bay Naval Station, Manila. The exact order of places where I lived and timelines might not be that accurate because I was so young and moved so much. I lived on and off in the Philippines until I was 5 while my father was fighting in Vietnam. After that he was stationed everywhere until I was about 10 years old.I lived in states  like Ohio, Hawaii, California, Texas, Virginia, Oregon and finally Massachusetts where my father decided to stop moving. I went to high school in a small town called Harvard and then Berklee in Boston. I left Berklee to live in Paris 1985-87, then I’ve been in New York City since 1987 mostly in Brooklyn. I used to speak a Filipino dialect, but forgot it when we stayed in the US. I am fluent in English and French.

Zzaj: It’s obvious (to this reviewer, anyway) that you play in a lot of different styles of jazz… blues-related, straight-ahead, R&B, etc…. which style of jazz is your favorite – & why?

Ron:  I love all styles of music from everywhere and I will always try to attempt playing different styles. There’s a saying, “there’s only 2 styles of music, good and bad!”

I guess my favorite style to play is straight ahead-be-bop. I like fusion electric jazz as well.

I didn’t start that way though…. I started out playing rock. I was into seeing many concerts and played my 1st gigs in rock. Also I was a and still l am a composer of different styles (my major ar Berklee was Jazz Composition and Arranging).  Some of my good friends were into jazz so I started to see jazz concerts such as Pat Metheny, Miles Davis, John McLaughlin etc.

When I studied at Berklee an living in NYC I got really into straight ahead-be-bop jazz guitar particularly hanging out with George Benson, and studying with Ted Dunbar, Pat Martino, Bucky Pizerrelli, Barry Harris and Melvin Sparks.

Over the last decade, I’ve gotten in R+B,Funk etc. My father listened to a lot of Motown and Barry White, so I kind of grew up with that too.

Zzaj: You’ve played with a lot of “name” musicians, Ron… who have you NOT played with yet that you would love to do a show with?

Ron:  Oh, many people, Sonny Rollins,Wynton and Branford Marsalis,Pat Martino, John McLaughlin, Herbie Hancock, Chick Corea, Jack Dejonette.  The list goes on and on. You name any of the living masters, I want to play with them!

Zzaj: From all my own travels ’round the world, I’ve come to believe that music is the only “language” that all people can understand, & that it may be the only road to a peaceful world. Do you think that’s true? If so, why? If not, why?

Ron:  I believe that everyone in the world understands music too. It is possible through diplomatic exchange that music can bring peace and understanding. I have performed for Dept. of State for cultural exchanges and people seem to come together in countries where the US has sworn enemies like Algeria and Lebenon. The group Burning Gums is an international trio Ron Jackson-Guitar (USA) Norbert Marius-Bass (Hungary) Hiroyuki Matsuura-Drums and Percussion (Japan)  Music is the world language! 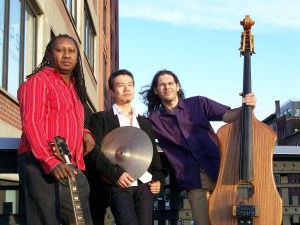 Zzaj: I see (again, from your FB bio) that you also teach music… from your perspective as a teacher, what’s the most important thing to teach an aspiring musician?

Ron:  I am always aspiring to be better teacher.  I teach all levels and most styles on guitar. The most important goal is to achieve an outcome. If you are a beginner, it may be just learning one song. If you are a good guitarist already, and you want learn jazz, the outcome would be being able to improvise over chord changes. In both cases, there are so many steps, hurdles, experiences, both mental and physical to cross. So if you are aspiring to be a musician you will need to dedicate a lot of time and energy to what you want to achieve.  Also you will want to do this in your heart, soul, spirit, gut or whatever you want to call it. The students that succeed always find practicing their instruments like meditation and a calling of some sort.

Zzaj: Your new site at http://www.ronjacksonmusic.com/#/home/ seems to imply that it is you doing the setup & authoring. Is that correct? If so, other than the obvious intent of communicating with your fans, what is your “vision” for the site? I mean – is it for actual blog/dialogue with fans, or will it be more oriented towards just letting fans know where/when you’re playing, what releases you have coming up, etc.

Ron:  My new website was just setup by manager, Steven Gardner at www.3rdalternative.com

We are still trying get the blog setup and as well as me learning to update the site.

Our goal is for me to interact with my fans in real time so eventually they can be involved and interact with me and my musical world. These things take time steps, small steps I realize!

Zzaj: How “tech-involved” does a guitar player have to be? Do you get deeply involved in the recording process, or are you more oriented to “just playing”?

Ron:  It depends on the person. I am know some guitarists who don’t’ use any “gadgets” while some rely on them.  I’m in both worlds. I love the natural acoustic on electric guitar as well trying to master guitar effects. When I record it depends on the situation, When I am hired as a sideman on a recording session, I play what ever they need me to play. With my own projects that I record at my home studio, I am the engineer, editor, session player etc. I really needed to learn and still learning music recording software and get a good grasp of it. There are all kinds mic and recording techniques that I am learning. Also I use Sibelius music notation software. Once you learn these programs you can save a lot of time writing music out, transposing etc.

Zzaj: Out of all the many musical activities you are involved in (live performance, studio recording, teaching, etc.), which one is most satisfying for you?

Ron:  They are all satisfying depending on the situation.

Live club and concert performances with a listening audience especially overseas are much more satisfying than restaurant gigs. Teaching a student who loves music of any kind, who loves practicing, who I here later becomes a great professional musician (which I’ve had many over the years) is much more satisfying than a student who thinks of practicing like homework or just showing up every week never touching the guitar.

With recording, I always feel I could play better, make it perfect. The hardest part is having the feeling as you are playing live but in the studio. Sometimes I am satisfied in the studio, other times not. It’s hit or miss to me but sometimes I surprise myself with my recordings

Zzaj: Which player on the jazz scene influenced your own playing the most? Or did you pick up your playing style totally on your own, without letting yourself be influenced too much?

Ron:  I am influenced by everyone on many different instruments, in every style in some way. I think Wes Montgomery, George Benson and Pat Metheny have influenced me on guitar. I was also influenced by rock musicians like Jimmy Page, Jimi Hendrix and Eddie Van Halen. Of course, nobody can really play exactly like someone else. I know I have my own way of playing, phrases and “licks” you can say. I can hear that when I listen to myself. I think composition really develops your own style and personality because your are creating something that is you.

Zzaj: We have many players who are interested in music as a career? Please give them any advice you may have on how they can be successful… in other words, is it “practice, practice, practice”, or “high energy for playing & performing” that makes a player a success?

Ron:  First of all, being a great musician is what we all strive for. That’s come with “practice, practice, practice”, or “high energy for playing & performing” or whatever you want to call it. Some people I know are naturally gifted. Unfortunately, most of us aren’t, so we need to work hard. The most important advice to anyone who wants a career in music (or in the arts) is never to get side tracked by hurdles in life. Many artists for example take a day job when they start out because they aren’t making it music. I starved when in Paris and when I first came to New York. I had children when I was young to take care of, but I rarely had a day job. When you start doing a job that’s not related to your musical career, you fall into a trap. All the hours you spend working could have been spent  practicing, networking, advertising (which is almost free on the internet with social media), anything related to your career. Also, all your energy has gone to the job, now you are too tired to even want to play or practice music. Also, making it in music I think is more than just how great you play. It’s also about your personality, reliability (if you are always late, no one will hire you), getting out there(networking) and who you know. I teach these things to all my students who want a career in music.