I first heard of Ivy Joe from a writer friend of mine (Jane DeNeefe, from Huntspatch), & wound up getting some of his music in for review from his promoters…. as soon as I heard this cat, I knew I needed to get an INTERVIEW with him!  Read through the entire insightful and intimate interview… thanks for takin’ th’ time, Ivy Joe! 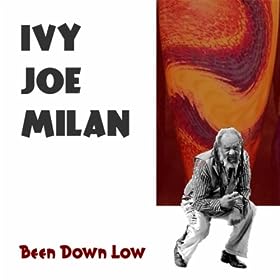 Zzaj:  I’ve read articles that said you sorta’ “integrated Huntsville” back in the ’60’s.  Give us a few words that describe what those days/years were like for a player/singer in Huntspatch, Ivy Joe.  Make it a bio sketch that tells us where you were born, how you wound up playing & singing,& how those early years were.
Ivy Joe:  I think there was some integration of music before my time in Huntsville.  We just didn’t see it much.  I always wanted to be a musician singing and entertaining folk.  Having a learning disability, which was not recognized during the 60’s, to my knowledge, was my way of feeling that I could be a part of society rather than being disconnected from.

Reading “Rocket City Rock and Soul” by Jane DeNeefe gives great insight on how it was for myself and other musicians born in Huntsville, while being on the music scene.

I remember at age 17 geing on stage with Rick Nelson and the Crown Five.  We sang and danced James Brown steps and got great response from the audience with no problems at the Cotton Club.  I feel that as long as you giving the people what they like, animosity will be held in place.

I was asked could I sing by Tommy Graham, a Snowball.  I said yes and the rest is history.  It worked!

Zzaj:   Since you’re up close to my age (I’m 67), you probably have some of the same ideas about how the music has changed… is it better these days, or have we moved too far over on the tech side?

Ivy Joe:  Zzaj, I’ve seen how music has changed over the years and I like music that has good rhythm.  I guess one could see music better these days because there are so many different types to choose from.  I even like some of the techno stuff.  You know as long as it’s swinging.  I must say thank God for technology, though, because you can do almost anything in the studio

Zzaj:  If you had the chance to play with any musician, or group, who would that be?  Why?

Ivy Joe:  That’s an easy one.  Santana!  I like the driving force of the music and the message.

Zzaj:  I said (in my review of your “Been Down Low” CD) that your singing made me feel like you’d “been there” before… do you agree that the best players/singers are ones who have experienced the parts of life they sing about?

Ivy Joe:  I believe that life experiences truly influences what you sing or write about.  However, poetry can also influence music.  “Mystery Woman” was only meant to be spoken words about a relationship.  So relationships can also be defining factors in the music you do.
Zzaj:  How/where did you learn congas?  Just a “natural thing”, or do you have “conga heroes” that helped you learn to rhythmize – or, is that just a stupid question?

Ivy Joe:  Zzaj, playing the conga was something that I sought out while listening to music.  My favorite music is jazz.  I would always hear that extra punch or reinforcement in music. When I found it was the conga drum, I sought out what it was that I liked so much.

Zzaj:  One of the things I felt during the years I lived in Huntsville (off & on from 1965-1984) was that it was a real melting pot for musical cultures.  Do you agree?  Is that still true, or has it changed?

Ivy Joe:  What I see in Huntsville is an influx of musicians brought on by the different people that have come here with families that support the space and Army programs, as well as the colleges and universities.  Huntsville has no shortages of great musicians.  If a musician feels that he or she has great talent, I’ll say come to Huntsville and meet the competition.  Change is constant in the Huntsville music scene.  Be encouraged or discouraged (smile).

Zzaj:  One of the things our readers love is being able to get the “inside scoop” on what an artist has “in the works” – so tell us what your projects are (& if there are links to samples of new music, please give us those, too).

Ivy Joe:  I must say that I’ve done a lot of writing.  In looking back, some of it is good but there are times when I read or have to rewrite a song.  I have to laugh at myself and wonder what was I thinking.  There are times when thoughts are totally displaced and make no sense to me.  The original thought was lost in the process.  CD Baby and iTunes has a Santa Claus Christmas jingle that I’ve sang, in having some fun, for thirty years or more.  I admit some changes had to be made.  I also have an adult version that may be up for grabs for the coming Christmas 2014.

Zzaj:  Since you’re a blues singer, you may have a different view on rap music than I do… how do you feel about today’s rap?  What potential (if any) does it offer up, or are other forms of music somehow “better”?

Ivy Joe:  Zzaj, being a soulful/blues singer that I am, I enjoyed rap music early on, groups like Run-D.M.C. and others with that style or format.  However, later on and today’s rap speaks of too much violence.  There is profanity and degrading of mores and values that have breached true cultures values.  Seems that some rappers cleaning up their act and trying actually to get back to playing some real music.  Rap music I feel has an ill effect on younger people, causing a great percentage of them to land in prisons and causing their culture and community to be disrupted.  Note the percentage of young adults accepting what they hear and getting themselves in situations that take them out of the job market, losing benefits of state and federal aid, housing, etc. due to prison sentences and recidivism.

Some gained much fortune, while others lost, with no regard for themselves or the family support system.  Hopefully rappers that made money and gained fame can change their message and restore true values to their listeners.

I do feel that music is the strongest guiding force we have.  Ha, we even sent some out in space.

Zzaj:  How do you write a successful song, Ivy Joe?  I mean, do you lock yourself down somewhere in isolation & concentrate?  Or is it more a matter of piecing a song together with those little “inspired moments”?

Ivy Joe:  In writing song ideas, inspiration can come from situations, from things I hear and in some cases just knowing that there is life occurrences that need to be addressed.  I feel that giving people a wake up call can help people turn their life around.

Sometimes I just hear music or rhymes in my head and in the search for clarity of these thoughts there is a song that exists.  Sore knees was the true inspiration for “Been Down Low” and “Take Me Down”.  Shows how this pain brought about both of these songs, in trying to write one song!

Zzaj:  We have a lot of readers who are players/singers themselves – some of those folks are thinking about making music a full-time career… give them whatever words of advice you may have about whether music is worth doing as a career.

Ivy Joe:  Zzaj, I feel that every human has a desire to do something that they love to do.  Music is like most things we pursue.  There are two ways to do music.  You must study hard and practice often, like daily.  On the other hand, some people have a God given talent that is given if you put forth the effort to develop your talent.  The supreme being will put people in your life to help and support your efforts.  Be sincere about your goal and persevere.  Success will come if you truly believe in yourself and be true to your dreams.