NOTE:  This page will take a minute or so to load, due to the amount of embedded videos… please be patient!!!

Deja vu doesn’t strike me often – but when it does, it’s usually in my adopted home-town in the magick-land of Olywa…. the gent you see on the left (besides me, in the chair) is one Danny Kelly, one half of the team that makes up a splendid duo called “The Hinges“, who I had the opportunity to watch and listen to last night (7/26/2014), outside a local bookstore called “Last Word Books“, where Danny and Karen Hancock (orb-vious-ly, the other half of the duo) were performing right at the edge of the sidewalk… & of course, that’s where the deja vu comes in… I can remember times here when there were singers like this literally crowding the downtown sidewalks, & venues where they played daily/nightly… and it wasn’t just the playing… those folks were “real people” (most of them, anyway) who wouldn’t hesitate to share a word or three with you, and that made all the difference in the world; it no longer seemed like they were “stars”, & you just the riff-raff.  That’s exactly the way it felt last nite… I was able to just hang out, watch them setup & tune-up, & talk about various & sundry… no “Smartphones”, no “I-Pads”… just the sun going into set mode, a comfy chair that Danny steered me to, & a conversation.  Deja vu – indeed! 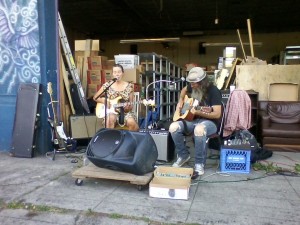 After the setup, they began playing, and one of the songs they played (from their first CD, to be reviewed in these pages later), “Waterfall“, brought back the mem’ry of why those past times were so important… these two are absolute wordsmiths, who convey the hope and magick of those earlier times; they truly “tell the story” of how wonderful life can be when you allow your imagination to carry you to a better place.

Another stand-out for me was their soon-to-be-released song, “The Potion”… a genuine inner view of (what Karen called) the “inner child”… listen & watch below: 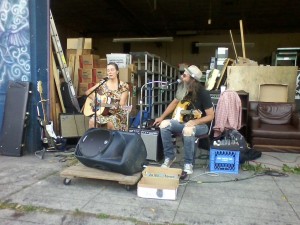 Life only gets better when it’s shared, whether past, present or future, and “The Hinges” did a marvelous job of using their well-played instruments and well-crafted lyrics to help bring back an era we would all love to have return (in full force).

I really recommend that you seek these folks out and allow yourself the sonic pleasure they will provide… I’m truly glad to have made their acquaintance!  As I said above, I’ll be reviewing their current CD in an upcoming issue, and hope to get a preview copy of their soon-to-be-released album for advance review in these pages as well.  What an absolutely cool vocal adventure!  Don’t hesitate to check them out as soon as you can, for a taste of the same deja vu I experienced last night!  Ciao fer’ now!

Today, I contacted Matthew Shell (aka MTS), based on listening to some of his music on REVERBNATION… he responded almost immediately, with his “Reel” (watch it below), a sample of some of the things he’s been doing with video.  I was blown away by his music (you’ll also see links to some of that below), but the concepts he conveys through his video production are full of power & energy that just won’t stop:.. definitely not your “grandad’s rap (or hip-hop, for that matter):

It was his music that I found most entertaining (both in the video above, and in the tunes you’ll hear below.  This is the “new talent”, the stuff that will help us (all) rise above “the man” and march on to the 22nd Century – thanks for sharing this, Matthew:

On a beautiful little Arpi island, New Age artist Michael Mkrtchyan is creating some of the most inspiring and beautiful music you will ever hear… embedded below you’ll be able to hear Anhidema | SAGHMOS (Official music video), his first published on FB.  I’m pleased to have made his acquaintance, and decided I wanted to feature his excellent video as the first of a series that will appear in this section of my magazine – enJOY!

A very experimental musical friend of ours (on FB, of course) from Poland, Andrzej Rejman, sent me a link to some music that those into experimental music will fall in love with in only seconds.  LIVE SESSION – INSTYTUT 116 – WARSZAWA – 06.2014 (Grzywacz, Rejman, Sudnik); I am LOVING those vocals, and the instruments are (truly) “out of this world”: