I don’t ever miss this festival (when I’m in town)… yesterday, 6/26/2015, was the first night, and Oh, what a night it was…  I’m only covering the first night in this installment, and will get ’round to the other nights are I observe them.  A definite “hats-off” to Fred Kellogg, this year’s curator… he NAILED it with his selection of performers – in every way!

6/26/2015 – The first night of performance was held at the Elks ballroom… I arrived about 4:30 & spoke briefly with Fred, who was in the process of

setting up for his act.  I walked downtown to the Spar for a round of oysters, then visited Obsidian for my daily dose of high-power caffeine.  The first set was for the group Fred played in, “The Giant Worm“… their sound checks started about 6:30… sax, stick, 2 basses, drums & spoken-word all checked out & they rolled out their high-energy jazz rambleaux at about 7:15.  Some GR8 spoken-word for the intro piece (“Pulled Over By the Dream State Police”).  This huge group move chaotically thru turf unfamiliar even for the most seasoned experimental/improv adventurist…. all the way to their version of Nirvana.  On to a kinda’ funky beat thang with some interesting distortions emanating from the “stick”… very much “string together”, no real separation between the pieces, but the energies are muchly different…. kinda’ like “funk orchestral”, a musical state of affairs I imagine Frank Zappa would have approved of…. some FINE sound collages on their 3rd piece – definitely “in the zone” – the Twilight Zone… no question but what they will “work” their way into your awareness.

The next act up was “Uneasy Chairs”… sheer wall-of-noise guitar, not for the uninitiated…. very interesting use of high-end feeback to create such 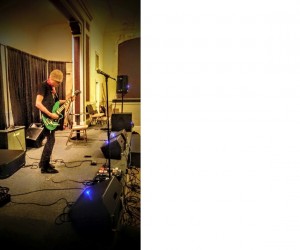 growling monsters and horrifying soundscapes that even veteran listeners must use earplugs… the non-vets will very likely just leave the room.  This wasn’t something I’d take mom to hear, but it is still very pertinent to the experimental genre; the whole idea sessms to be to “paint” with the noises generated via the feedback.  He actually wound off into some very interesting “guitar pick sculptures”, and infused his act with more creativity than many “pure noise” artists I’ve watched perform during previous OEMF events.

Tonal Masher (aka Aram Shelton) was up next (don’t have a pic from the performance this year (yet); will post it when I do)… I was privileged to watch him at last year’s festival, but his act tonight is in a totally different vein… his

high-energy and creativity are still prevalent, but the performance (except for a brief sax solo up-front) is nothing like I’ve ever heard him do before.  When he moves from the solo into his Tonal Masher persona, he “weaves” sonic wonderments from electronics via his sax… completely unique and filled with the kind of sensitivity that only a true master can achieve.  Adam held every audience member spellbound on his third foray into the sonic netherworld… absolutely one of the best experimental sets I’ve every heard… BIG kudos… after discussing it with him, I’m quite sure a CD will be winging it’s way to me for review with many of these more experimental sounds in the package – surely will be lookin’ forward to that package!

Samantha Boshnak’s quintet is next in the lineup (again, don’t have a pic from the performance this year (yet); will post it when I do)… I’ve reviewed quite a bit of her work before (issue # 143 and # 135), but had not heard her live yet, so this will be a treat.

After a quick sound check, the horn intro (trumpet and reeds) to a very high-energy piece that is ultra-precise and totally full of the energy of life.  The quintet is much more in a traditional jazz vein than previous acts tonight, but not so tradition-bound that they fall out of the experimental realm.   The next tune is a new original with Nellie Bly as Samantha’s inspiration…. tons of tension and dark tones, which is how she intetended it to be, I imagine… excellent vocal weave in the middle of the tune over a bass strum and some wonderful electronic keyboard.  Every tune, including this 3rd one, is full of intricate surprises and refreshing nuances – just BURSTING with energy.  Truly one of the best live jazz performances I’ve seen in the last 20 years.

The last act for tonight are festival founder Jim McAdams’ (aka Ricardo Wang) Dead Air Fresheners… the photo at left captures a bit of the total environment of insanity these folks perform with… I missed them at last year’s festival, so just had to stay this time… they are ABSOLUTELY more polished together than years ago when I first witnessed their antics.  in full costume, you won’t recognize any of the players, but will certainly catch on to the similarities with groups like Negativeland… sonic manipulation to the extreme – nothing is sacred for these players and “Theater of the Extreme” hardly covers the spirit of fun and whacko they generate!  One of the most “experimental” performances of the entire OEMF – if you have the chance to witness their acts – DO NOT miss it!

6/28/2015 – The other two nights of the festival were held in a different venue… due to extreme heat and crowded space, I only was able to witness one

of the other acts, on 6/27/2015… “Long Division” set the night off with some firebrand rockers… you couldn’t call this jazz, & you could not (either) call it “rock”… in fact, it was unique in its’ own write… the key thing about this act is the JOY they expressed in playing… watching festival curator Fred Kellogg rockin’ out on bass & the other two players (Gary Dye – drums, percussion; A Rainey on guitar) in the trio whompin’ th’ toonz out was pure pleasure & makes one realize that players with the true “spirit” are hard to find these days.  If it hadn’t been for the “press” and “heat” in the room, I would have stayed for the other acts, but I guess that just shows that I’m gettin’ older & krankier these days.  What a kool band to start the second night of the festival off!