Ev’ry once in a while, I discover a “sleeper” in the world of rock/funk/fusion… this CD is absolutely KILLER… surprised I never heard them before… if you like HIGH-ENERGY music, you WILL dig down deep on this one! 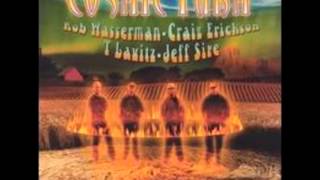 Here’s a bit more information from ALLMUSIC:  This ad hoc instrumental quartet is a supergroup of sorts. Comprised of immensely talented jazz and jazz fusion veterans (bassist Rob Wasserman, drummer Jeff Sipe, and T Lavitz on keyboards) it is spearheaded by guitarist Craig Erickson. He writes all the material, takes the most solos, acts as producer, and put the project together. Although released in 2005, it’s a knowing throwback to the jazz-rock fusion of ’70s acts such as Jeff Beck, John Scofield, Return to Forever, Allan Holdsworth, Dixie Dregs (of which Lavitz was a member), and any number of similar acts that generally favored instrumental dexterity over the compositional and melodic. It’s a solid, incredibly well played album that suffers mostly from a lack of identity; basically, this could be music from any of the above artists or dozens of others. That’s not a terrible thing, and surely any fan of the genre would be thrilled with adding this tasty, always professional outing to their collection. These guys have amazing chops, yet the songs lack a strong melodic presence. It’s more than just a bunch of jamming, but not much, and there remains a sense that the foursome is simply working a groove without creating something unique. Guest Paul Hanson on bassoon twists the formula slightly on a few selections but his contributions are too subtle to make an impact. The driving funk of “Forecast” gives bassist Wasserman a chance to showboat — one of the few — on a song with a bit of a recurring motif. Erickson shreds with the best of them yet there is little distinguishable about his guitar playing and he takes the spotlight too often, leaving the others as talented backup to his fret dancing. There is something rather charming in the retro-ness of the concept since there aren’t many jazz fusion albums being released in the mid-’00s. Still, with musicians of this world-class caliber, the final product is run of the mill for the genre.